To make an apple stock, place the apple peels and cores and the water in a saucepan and bring to a boil over high heat. Add 1 cup of the brown sugar, the cloves, and cinnamon stick. Reduce heat and simmer for 20 minutes. Remove from the heat and set aside.

Toast the almonds in an 8-inch skillet over medium heat, shaking the pan and flipping them constantly, until the nuts are light brown, about 4 minutes. Don't let them burn!

Toast the bread cubes in a 350°F oven until they are light golden brown, about 20 to 30 minutes. Don't let them burn!

Combine the milk and eggs and whisk well until combined. Gradually whisk in 1½ cups of the apple stock. Do this slowly so that the egg mixture does not get too hot. Then whisk in the ground cinnamon, nutmeg and the remaining ¼ cup of brown sugar. Add the toasted bread cubes and allow them to soak until most of the liquid has been absorbed, about 20 minutes. Gently turn the bread cubes once or twice while they are soaking so that they are soaked through on all sides.

Bake, uncovered, until golden brown and bubbly, about 30 to 50 minutes.

Delicious by itself or served with whipped cream. 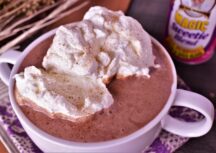 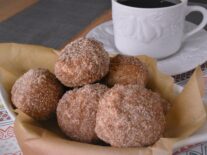